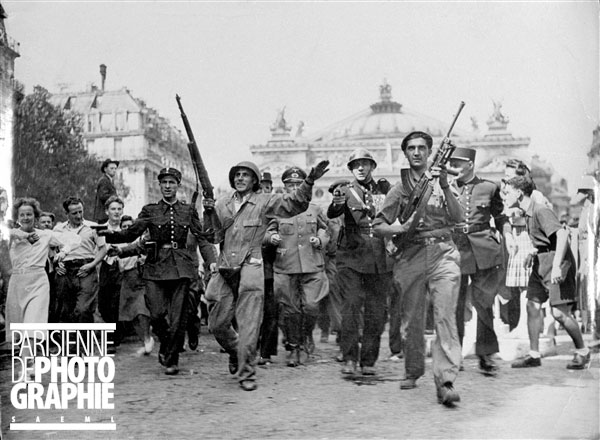 Surrendered German soldiers and their French captors, Place de l’Opéra, 25 August 1944. Most of the résistants in this image are policemen. The man in coveralls is a tank crewman, probably from the Free French 2e Division Blindée. (Photo courtesy Parisien Images, © LAPI / Roger-Viollet.)

Résistant du mois d’Août (French) : a person who joined the Resistance movement in August 1944, as the liberation approached. Carries an element of contempt.

Seventy years ago, on 25 August 1944, the German forces occupying Paris surrendered to a mixed group of resistance leaders and Free French and American army officers. Remarkably, much of the effort to liberate Paris was led by the French themselves. American and British planners had intended to bypass Paris, but French leaders at all levels forced an early intervention.1

On the 19th, with the Germans still in control of the capital, resistance members rose up in revolt. Their numbers included both long-time members and people who took to the streets spontaneously. They built barricades, in time-honored Parisian tradition, paralyzing the occupying forces. On the 24th and the 25th, Free French and American forces – diverted to the capital by a reluctant Allied command – came to their aid.

The Résistants du mois d’Août, or RMA, came to the fight only as Allied armies approached. The motivations of individual late-arriving resistance members are complex, varied, and difficult to parse. Some joined out of a sense of shame for prior inaction or to cover their past collaboration. Others joined because only toward the end of the war did they see a point to risk and sacrifice.

The same ambiguity characterizes the whole of the French relationship with resistance and collaboration throughout the war. The police resistance illustrates this well: early in the Occupation, the police, charged with maintaining order, and habitually opposed to the Communists and foreigners, overwhelmingly sided with Petain’s Etat de France. They became disgruntled later, as the failures of the Vichy state grew, and a small number of police joined the resistance. When the uprising in Paris arrived, though, the police took a leading role – one for which they were uniquely suited, with their organization, weapons, communications, and freedom of movement.2

Through the uncertain years before 1944, the greatest burden of resistance work fell to a small number of groups, mostly outside the center of society: trade unionists, Communists, students and intellectuals, immigrants, and conservative Catholic organizations. The Free French forces that crashed their way into Paris were themselves heavily made up of people on the edges, including colonial soldiers from Sub-Saharan colonies and Morocco, and men who had gone into exile after fighting for the left in Spain.

Yet in August, a broader range of people joined the fight. The story that Paris was freed by the French themselves was critical to De Gaulle’s claims to independence and grandeur in the days and months after August.